Pets and Other Comforts 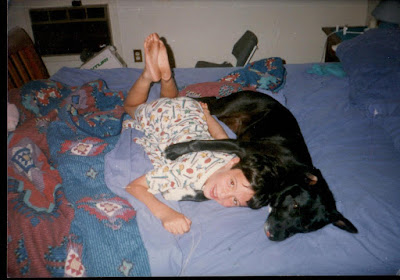 A photo of Noah that I hadn’t seen in years fell out of a cabinet the other day. He was about 4 or 5, in his summer PJs, flopped on his stomach on the bed with our new dog, Wags, spread out beside him, one paw draped protectively over Noah’s back. Noah beams up at the camera in complete happiness, already secure in his bond with this dog.

A patient, long-lived Lab mix, Wags remained Noah’s spirit animal for years. She taught him to love as he doted on her, took her on adventures, kept her well hugged and kissed. He went on to befriend every pet he met, even a notoriously mean cat, who he curled up with to sleep. 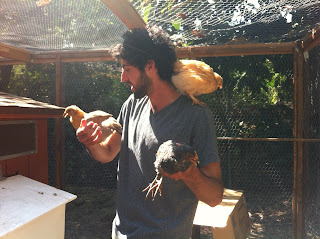 In a photo of him holding another cat during his college years, he looks searchingly into the cat’s face as if wishing his life could be as simple as hers. He found our chickens ridiculous, amusing himself by throwing them in the air to take pictures of them startling, but he held them tenderly, too.

Pets were Noah’s link with love and the life force. He needed their complete understanding and loyalty, the steadiness of their animal breath. He had joyous reunions with Wags—snout ever whiter, gait ever slower--when he came home from study abroad and from semesters of college. 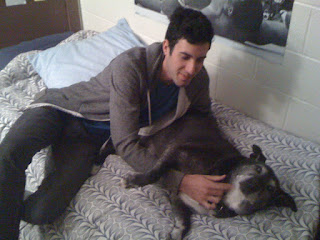 The onset of Noah’s major depression coincided with Wags starting to sleep a lot and drag and teeter on her walks. We had to put her down at age 19 in early 2012, just when our 20-year-old Noah was  struggling on a year off from college in San Francisco, far from home. In Philip Pullman’s The Golden Compass, which Noah read as a kid, everyone has an animal daemon who shares their fate. Did Noah begin to die inside when he lost his beloved Wags?

Eleven months later, we found a handsome, high strung Shepherd-Shar Pei mix at the pound, who we named Lobo. I thought having a dog in the house again, especially a young, energetic dog, would cheer Noah on his visits home. But he barely petted or teased Lobo in what turned out to be the last months of his life. He’d lost the will to laugh or play. 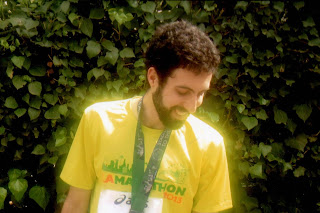 In the last photo we have of Noah, he’s smiling down at Lobo after running the Los Angeles Marathon. It was the first real smile we’d seen in a long time. Something about Lobo’s essential dog-ness managed to penetrate Noah’s despair, at least for a moment.

Two days later, Lobo was the last living thing to see Noah before he took his life in the garage. I’m guessing that Noah in his altered state didn’t notice Lobo at all. In the days and months that followed, Lobo would learn to stand beside weeping people and lick our knees. 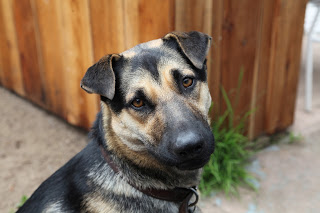 Now, the animals that once comforted Noah are a lifeline for my husband and me. When Lobo finally stops squirrel duty for the day and lies down on the floor in the evening, I lie down and drape myself over him, just like Noah used to do with the much more compliant Wags. We scoop up Miso, our son Ben’s little French bulldog, and cuddle her tight; she grunts and gurgles contentedly, as if purring.  We kiss all the animals on the head, even the chickens. (Actually, only Bryan kisses the chickens, daring to defy the health recommendations of the CDC .)

“That’s ridiculous,” Noah would have said about the CDC's warning. He would have tackled Miso on the rug and chased Lobo in circles around the yard. How we miss his animal spirit.

To my fellow survivors: How have animals been part of your loved one’s life and your own grief journey? Spending time with animals, whether yours or borrowed, becomes more precious than ever after trauma. Let’s hear it for the simple power of pet therapy!
Posted by Susan at 11:07 AM