Sharing Stories: How I Learned to Stop Fearing Attempt Survivors 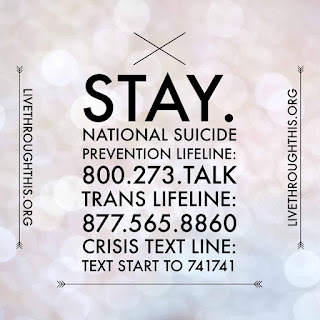 It was about a year after my son Noah’s suicide, at a conference for survivors of suicide loss, when I first heard someone describe what led to their own suicide attempt. My hackles bristled so fiercely I couldn’t hear the details. I resisted being dragged inside that bleak and scary place, as if despair were contagious and another person's suicidal thoughts could infect me. I didn’t want to hear stories that reminded me how Noah, too, may have had thoughts of being unworthy, of disappointing his friends, of no longer enjoying what he used to love, of feeling like his brain would explode. The trauma was still too fresh, my grief too all-consuming at the one-year mark. While trying to lift myself out of the hole, I couldn’t bear the burden of another person’s desperate story. I needed a safe place, and stories of attempt survivors were way outside the bounds.
Besides, I was jealous, especially of young people who had tried suicide and survived. Why couldn’t my 21-year-old kid have called that crisis line or botched the job or had one sustaining thought so he’d still be alive like you? Why couldn’t Noah have had your resilience or good sense or just dumb luck at his lowest moment?
Over the past few years as I’ve learned more about suicide and heard more accounts of would-be suicide, those stories have lost some of their terror. The shift has come with time as I’ve become steadier on my feet, and with exposure to the worlds of attempters, wearing down the shock and fear factor. It’s come through getting an intimate, moving glimpse into the hearts and minds of attempt survivors through the work of Dese’Rae Stage, who features portraits of brave, articulate folks from all walks of life on her website, Live ThroughThis, and whose own story, along with others, is featured in the excellent documentary, The S Word, by Lisa Klein. Des’ speeches and blog, and Lisa’s deeply moving film, as well as the poignantly named Project Semicolon (“your life is not over yet”), have opened a window on suicidality and suicide attempts with such love, honesty, and even humor that I no longer have to look away.
Now I search the stories of attempters, like I search the stories of those who died by suicide, for clues to Noah’s state of mind. I feel compassion for these strangers sharing their pain, and that helps me feel compassion for all the struggling people out there, along with all those who died by suicide and the people they left behind.
I’m proud to come together in common cause with attempt survivors at suicide prevention activities and fundraisers, like AFSP's Out of the Darkness walks. We each wear differently colored beads to represent our connection to suicide—for different types of loss, for attempts, for ongoing struggle with suicidal thoughts--but all of us wear the color for those who advocate for suicide prevention.
Just as the paths of attempt survivors and loss survivors converge at the walks, so, too, are we all haunted in some way by the specter of suicide. We want to throw off the shame and stigma that taint our personal histories. We dread anniversaries and other triggers, push away nightmare memories. Some days, we stumble around in the deep gloom of our minds. Whether attempt survivor or loss survivor, we need to remember that we’re not alone and that our lives are not defined by suicide. We need to try to hold our shattered souls in the light, even if we feel engulfed by darkness.
I’ll always be searching for clues for what happened to Noah’s beautiful mind. I hope I’ll continue to learn from the experience of attempt survivors, and I hope they’ll learn about another side of suicide from loss survivors like me. I’m so glad that the attempters I’ve met decided to “stay” and are speaking out; maybe when they hear my story, as in my grief memoir, they’ll be glad they spared their loved ones the nightmare of suicide grief. We all need to share our stories to better understand the beast of suicide and protect ourselves and others from its ravages.
Posted by Susan at 10:00 AM No comments:

In Their Own Time: Surprising Gifts 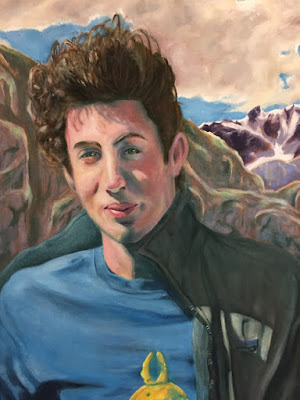 My 18-year-old niece was visiting from out of town last week and hadn’t even finished hugging me when she said, “Here, I brought this for you.” She held up a huge portrait of Noah that she’d painted, based on a scene from an extended family trip to Alaska in 2005. I was shocked and touched to feel my dead son’s larger-than-life presence fill the front hallway, as if she’d brought him along for the visit. There was the familiar green-eyed gaze, the wild hair in the wind, the sardonic raised brow and full, slightly tilted lips; there, too, the bony shoulder, the weird thrift-store T-shirt. I loved that my niece pictured Noah in a land of adventure with his head in the clouds. Even more, I loved that she decided to create this tribute and give it to us. Best of all, I loved that she and her family had enjoyed living with this image of Noah for a few months before my niece was ready to part with it. Because in the four and a half years since the suicide, I hadn’t heard much about Noah from my nieces, who I know adored him.

Also last week, I had a visit from a dear friend of many years who hadn’t been able to reach out much in the first years of my grief, who now said she wanted to “immerse myself in Noah.” She gave me a lovely string of origami peace cranes made of azure blue and white fabric that reminded her of the ocean Noah loved—and reminded me of the wavy blue and white border that runs through Noah’s scrapbook. How did she know? My friend listened to my grief and pored over the scrapbook I'd made for the first birthday without Noah, marveling at his vitality and the many chapters of his short life. Seen through her loving attention, his spirit momentarily flared back to life and I felt a surge of gratitude.

Then I heard from an even older friend, who hadn’t contacted me since a brief condolence email in 2013. She was moved to write at the news of the publication of my grief memoir, I’ll Write Your Name on Every Beach: A Mother’s Quest for Comfort, Courage & Clarity After Suicide Loss. I was amazed to learn that Noah’s death had affected her deeply, plunging her into a “paralysis” in which, she wrote, “I fought against the information, barricaded myself from it, and (unforgivably) couldn’t communicate with you.” She apologized and promised to read my book, whose title made her cry.

Three surprising gifts in one week to restore connections and replenish my ever-shrinking storehouse of memories! It's never too late. Each response to the loss of Noah warms me and brings my child back to me in a new way, knowing that people are still thinking about him (and our family).

I’m reminded of a friend--usually quick with a thoughtful, handmade note--who confessed it took her a year to send condolences after a close friend of hers died of cancer. My friend was so dismayed by the death, she had no words to offer her friend's husband; the more time went by, the harder it was for her to break the silence.

Something similar happened with another friend, who sent us the most tender, generous letter about a year after Noah died—the more precious since we’d long since stopped receiving cards and messages. It’s no coincidence that this friend, like my two old friends who resurfaced last week, all have young adult sons who struggle. These friends are (or were) filled with dread on a daily basis and no doubt can’t (or couldn’t) bear confronting the end they fear for their own families. Or so I assume; maybe my friends and I will be better able to talk about all this in our own time.

To my fellow survivors: It’s hard to read what lies behind others’ silence after suicide. It’s natural for us survivors to feel confused, hurt, or angry when people close to us don’t respond when and how we’d like. They may be hurting more than we realize, both from the suicide and the challenges it touches off in their own lives. Let’s try to stay open to the possibility of loving gestures whenever and however they appear.
Posted by Susan at 2:12 PM No comments: