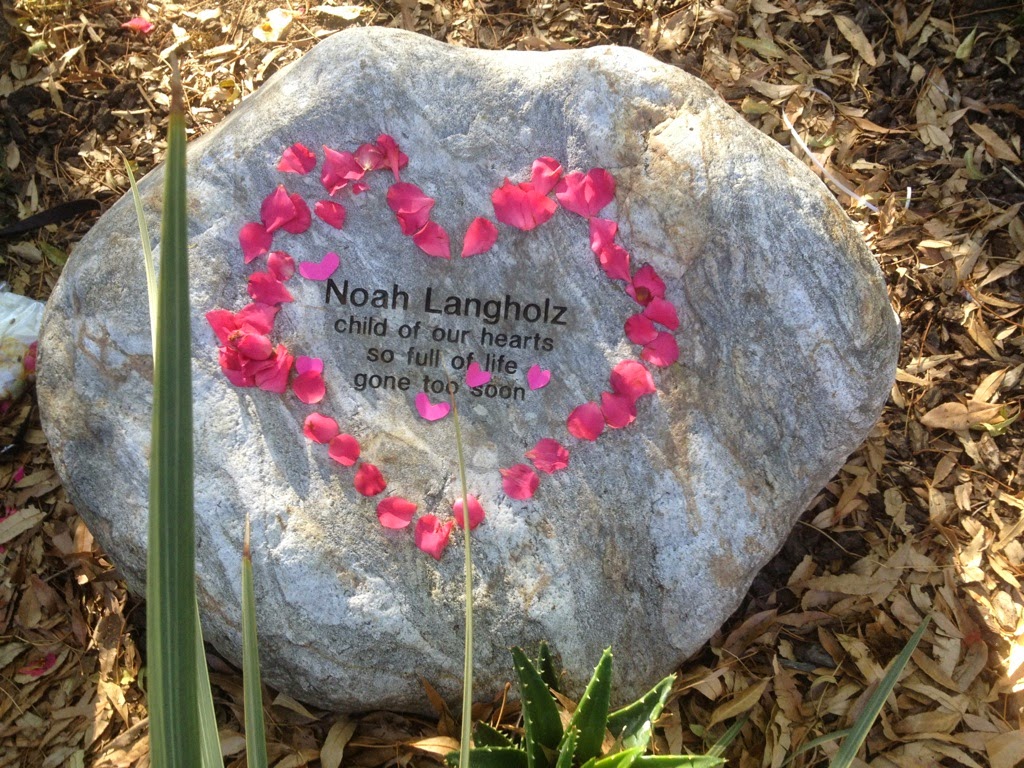 
I am easily triggered lately with the 2nd anniversary of Noah’s suicide approaching. My tears burst from a full-face grimace. I see a young quadriplegic on TV fighting to regain his strength and I think, why didn’t Noah fight for his life? Instead of moaning like an injured animal, I emit howls and growls of protest. I am back to fixating on “this did not have to be.”

I hear a segment on NPR about a “good death” and the death with dignity movement. I remember my mother's death at home from cancer at age 47 and am relieved to hear physician/writer Atul Gawande concede that there’s really no good death since it nearly always entails indignities, decline, discomfort, and loss, if not pain. I have been a lifelong believer in death with dignity, home hospice, and palliative care for the terminally ill. But talk of a good death right now gets me howling. As a mother who lost her young adult son to suicide, I’m too close to the worst kind of death.

Death with dignity can be a rational choice made by a terminally ill person after getting second opinions and exhausting medical remedies. Death by suicide, some say, is also a choice made by desperate people who can see no alternative. But if it is a decision made by a disturbed and distorted mind—especially a not yet fully developed young person’s brain--is it truly a choice?

Death with dignity can ease the pain and passing of a terminally ill person, ideally in the company of their family and friends and with supportive end-of-life care. Death by suicide ends the pain of the suffering person and passes it on to their family and friends, denying us a chance to help or say good bye. It forces survivors to look directly into the face of death and despair and to recognize not only our lack of control over the actions of others but our limited understanding of their minds.

Death by suicide does violence to the body of one person and to the soul of many, leaving a trail of destruction and doubt. It puts the health, happiness, well-being and sometimes lives of survivors at risk. It is a violation of trust with our loved ones, yes, and it is a tragedy. But it is also a violation of the social and natural order—a small-scale crime against humanity. It scares me to be so blunt, but that’s what it amounts to when we consider the collateral damage. No wonder suicide has been so widely forbidden and punished across time and cultures.

I will always try to understand my son’s suicide and suicide generally. I will try to be compassionate with those who take their lives and with those who suffer with (or without) mental illness. I will continue to join survivors and others who call for breaking the silence and advancing research and services around mental illness and suicide.

But I will not make excuses for my son or others who kill themselves. I am too hurt and angry. I miss Noah too much. I hate suicide too much. I will continue to rail and howl against the violence he did to himself, to everyone who loved him, and to our world.

To my fellow survivors and others who find this harsh, I'm sorry. This is how it feels today; I trust I will not always feel this way. I know our loved ones were not criminals who intended to hurt us or our world; they were lost in terrible pain. But I am howling against their actions right now. This did not have to be.
Posted by Susan at 9:11 AM 4 comments:

I recently made a tough decision about beginning semi-retirement in order to have more time for myself. Since Noah's suicide, I have felt too pressed to commune with his spirit and honor my needs for grief work, writing, spiritual practice, and other self-care. I hated having to put those needs aside day after day to attend to other obligations. I am fortunate to have the option of making this decision, and friends who knew that wondered why I was hesitating. Why was I torturing myself over this? All I knew was that it was triggering deep-seated self-doubt and reminding me of old patterns that predate this loss.

The wise facilitator of my support group pointed out that any decision while grieving is hard. But it's especially hard after suicide loss because we have come to doubt the decisions we made about our loved one while they were alive. We have been weighted by guilt over the "what if's" and "if only's"of our actions leading up to the suicide--and those questions can still haunt us, even if they no longer obsess us. As grieving parents, we failed in our responsibility to protect our child. The disastrous decisions we made or failed to make imprint on our mind to freeze new action and obscure the way to decisions.

It doesn't make rational sense but it makes intuitive sense. It reminds me of one reason that my husband doesn't want to leave home for long trips. He wasn't home when Noah killed himself or when I found Noah dead; my husband came home that day to the worst nightmare and a crime scene. So when he leaves the house, he sometimes worries that something horrific could happen while he is away. Just as when I come home to a quiet, empty house, I sometimes dread that something horrific has happened to my husband or our pets.

As suicide survivors, we can no longer trust ourselves or our judgement or the ground we stand on like in the past. We have become the unreliable narrators of our own lives. We are scrambling to get our footing in a house whose foundation has been shattered and that we are reconstructing--like building the plane while flying it.

"The loss of someone important to suicide assaults the assumptive world of the mourner," writes psychologist John R. Jordan.* "The suicide brings into question all of the things that the bereaved individual took for granted about the identity of the deceased, the nature of their relationship with that individual, and the mourner's own identity. . . . [S]uicide inherently challenges the belief that all human beings fear death and want to live, as well as many other guiding assumptions by which the survivors may have operated." Sound familiar?

The mourner's ultimate task, Jordan suggests, is to construct a "coherent narrative" about the suicide that is compassionate and "bearable for the survivor." This can take a long time. My fellow mourning mom, Marjorie Antus, finished her narrative nearly 20 years after losing her teenage daughter to suicide (see her new book, My Daughter, Her Suicide, and God: A Memoir of Hope on Amazon)--and she says that the journey continues.

From unsteady ground, I've decided to take time out for my narrative. I hope I will come to trust my decision.

*From Jordan, J. (2011). Principles of grief counseling with adult survivors. In J. Jordan & J. McIntosh (Eds.), Grief after suicide: Understanding the consequences and caring for the survivors. NY: Routledge.