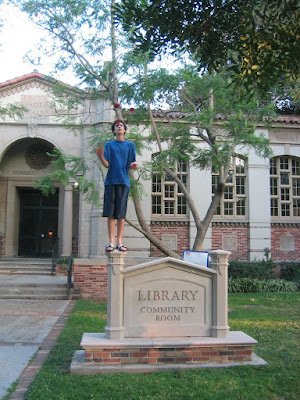 Dear Noah,
I’m spending a rare few hours in our old neighborhood, your home town. I’ve been avoiding the place since your suicide. It’s too full of reminders of you growing up before everything fell apart, the last place you felt happy and at home.

I was at the library today for the first time in years, the core of the town and of many memories. I used to bring you and your brother to story time, long before we moved here. I’d take you outside and you’d clamber around the giant, protruding roots of a magnolia tree like bold explorers before we settled down to read your library books.

You used to be excited lining up on the library grounds for the 4th of July Parade with Dad, Ben and the juggling club. You were a small-town celebrity from ages10-14, juggling flaming clubs and water balloons as you marched down the main street, classmates and neighbors cheering from the sidelines. Across the street from the library, you juggled in community festivals, moving effortlessly through difficult patterns and emceeing the famous celery trick (where Dad and Ben juggled clubs until they knocked a stick of celery out of the mouth of an audience volunteer).

Next to the library is the coffeehouse where Dad used to hang out, where eventually you’d come to linger over espresso at the outdoor tables with friends, trying to look cool. Down the street is a French café where you dreamed of working and speaking French, but never did. Dad and I ate there a couple years ago on your birthday with your best friend’s mom and your girlfriend, images of you hovering over our heads.

Not far from the library are the schools where you made lifelong friendships, debated a whip-smart conservative classmate, miraculously dragged yourself to 6am water polo practice. Here are the streets where you learned to drive, where you walked with your long, loping gait and biked and skateboarded till you hit a pine cone and fell--I half expect to see your teenage self careening around the corner. Here, too, are the friends’ homes where you went to your first girl-boy party, cooked midnight pasta, played with BB guns, and of course, drank, smoked.... 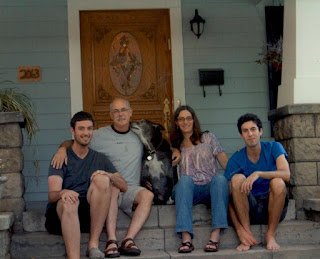 In our last picture from ten years in this town, we are a family of four arrayed on the front steps with an aging Wags. Dad and I are about to sell the house and you are about to leave for your sophomore year of college—where a few weeks later, you’ll lose a close friend to suicide and begin your struggle with PTSD, depression and anxiety. I often wonder if losing your touchstones of home, home town, and soon after, Wags, added to your burdens.

In the weeks after your death when I was still too traumatized to drive, I tried not to look out the window if Dad and I passed through the town. I couldn’t bear seeing kids walking to school or going into Starbucks--all signs of the normalcy we’d lost. Five-plus years later, being out and about here still makes me uneasy with a faint tug on the gut that I can’t shake. 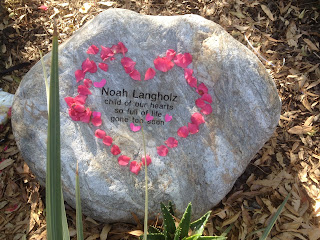 Now our main connection to this town is the stone with your name in the Children’s Memorial and Healing Garden in the town park. I try to visit several times a year, especially on your birthday and Valentine’s Day. I sit by your stone and write and weep. Sometimes I bring others to grieve with me. Today I brought you one of those huge, shiny acorns you used to collect.

Next month, I’ll be at the library to give a book talk* on my grief memoir about losing you. I’ve given a lot of these talks but the location of this one makes me nervous, attached as it is to memories of your years of promise. I hope to see people there who knew you and miss you. I hope to feel your spirit watching over me.

To my fellow suicide loss survivors: Are there places too painful to go that remind you too powerfully of your lost one? With time, choosing how and when you visit, you may find comfort going there--another way to keep precious memories alive.

When Talk of Suicide is Off Limits: On Both Sides of a Gag Order

It’s been five and a half years since the suicide of our son, Noah. We thought the days of dealing with other people’s discomfort with what happened were long past. So my husband and I were taken aback when a relative told us that if we planned to visit, they would ask that we not talk about Noah.

My pulse surged. The request was a stab in the gut, censoring the most important thing in our lives since 2013, as if Noah had never lived and his traumatic death had never happened. It heaped more hurt on the pain we’d swallowed in the early years when the relatives stopped asking how we were and missed Noah’s memorials. Now, Bryan and I felt silenced, shamed, and isolated all over again, as if our very presence was considered toxic.


I couldn’t live under a gag order. I knew I’d have to say something in response, but I was uneasy. Something felt dreadfully familiar.
It came to me with a pang: What had been done to us, I had recently done to an old friend during a phone call. I had silenced her, a fellow suicide loss survivor, when she was telling her story by setting limits on parts of the story that I didn’t want to hear. In shutting her down, I was protecting myself from things I found disturbing—just like my relative. Later, in apologizing to my friend, I learned that I’d said other things during the call that upset her greatly and that my whole sense of what was over the line was off the mark.


So here I was, on both sides of a gag order, impaired in my understanding of others. I felt humbled, my righteous indignation at the relatives deflated.
The email to them that I’d been agonizing over now flowed easily, touched with compassion. I wrote that Bryan and I were saddened at how their needs and our needs seemed to be in conflict. That they were entitled to protect themselves as they saw fit, and we would never wish to harm them. That when we talked about Noah among relatives, it was usually to share good memories, and that it hurt us that even this was not welcome. That we wouldn’t come to visit but hoped that we could talk in person sometime soon to clear the air.


“Thank you so much for your understanding,” came the quick reply, with a “yes” to talking it over one day. I look forward to that day, whenever it comes.
Suicide and the grief that follows it lay bare so many human limitations. The limits on our suffering loved ones’ ability to withstand the pain, have hope or seek help. The tragic constraints on our own ability to understand, help or save them. In the aftermath, limitations on how ready we are to look at pictures, deal with the person’s possessions, accept that everyone grieves differently. Some survivors avoid support groups because they can’t bear the burden of other people’s stories. In staking out what’s off limits, they are taking care of themselves—like my relative with me, like me with my friend, maybe like you.


To my fellow survivors: How have you navigated the limitations others place on you in the aftermath of suicide? What about the limitations you notice within yourself?
Posted by Susan at 8:15 AM No comments: