New Directions in the New Year


This is the first Jewish new year since Noah's suicide that I could begin to reclaim the kind of introspection and repentance I used to do in preparation for the holiday. I went to a retreat where I cried often but could still be present for gratitude practice and important teachings about despair, comfort, and transformation. I wrote a little in my journal about where I’d missed the mark, hurt others or been hurt by them, and intentions I wanted to set for the new year.

Reading those intentions a few days later, I was appalled to see no mention of Noah. In the past, I always had a resolution for being my better self with each family member. This year, I thought about finding daily ways to remember Noah because I’m uneasy with how memories of him are coming unglued in my mind. But when making the list, I forgot to include anything about Noah’s memory, much less a fuller sense of forgiveness—that murky place I rarely visit. It was as if Noah had slipped from my consciousness. This scared and chastened me; I joked with my support group that I'd have to atone for the omission. The facilitator reassured me that Noah’s absence from the list means I'm starting to integrate the loss and focus on rebuilding. I hope she's right. When I looked at the list again, I noticed that my resolutions for my husband and living son relate back to Noah’s death, so indirectly, he was on the list all along.

Poet Merle Feld suggests warming up for the Jewish new year by reflecting on when in the past year you were your best self and felt most proud or fulfilled. Those moments came for me when I was reaching out to other suicide loss survivors and creating tools, experiences, or writings to help them move through grief. I also felt fulfilled when I used my voice or leadership to enrich spiritual life in my Jewish community. Grief has propelled me into greater expression of caring, compassion, and creativity.

Therese Rando writes in Grief, Dying and Death (1984) that mourners must create a new relationship with the person they lost and a new identity for themselves. I’m on the way, I think, to a shift in identity, but I’m stumped when it comes to re-forming my relationship with Noah. Maybe I’m still mourning the part of me that has died. “The interactional part of the self created by the unique and special relationship . . . now exists only in memory,” according to grief expert, Rev. Alice Zulli. All the parts of me that were linked to Noah, involved in raising and loving him over the years and thinking about, interacting with, and worrying about him as a young adult, have been slowly leeching out of me since the shock of his suicide. The dead take us with them; it’s easy to feel dragged away, especially with suicide loss, when there's no chance for reconciliation or good byes and we may have felt helpless for months or years in the face of their suffering. Zulli advises the bereaved to grieve for what is truly gone, affirm what continues, and accommodate the new.

Right now, it’s hard to see how a one-sided relationship to the past and to memory can be a relationship at all—especially with a vital young son who was once so engaged and engaging. Maybe that’s a task for the next new year.
Posted by Susan at 3:34 PM No comments:

From Numb to Stunned

While out of town recently, I was feeling numb about Noah, as if detached from my loss and traveling incognito. I was underground; no one knew I was a suicide loss survivor. Actually, most people I talked to did, though only a couple expressed condolences. If people feel unsure of what to say in the immediate wake of suicide loss, how much more awkward it is after time has passed. To speak or not to speak? I propose a new rule of etiquette: if you haven't seen the bereaved person since their loss, no matter how much time has gone by, murmur a few words. It's not a painful reminder; we are reminded every day. It's a caring, respectful acknowledgement of the enormous hole in our lives.

Only one moment on my trip broke through the haze. In a small museum, I turned a corner and looked down on this plaster scale model of  the bronze Pennsylvania Railroad War Memorial--the grief within suddenly embodied, filling a gallery. 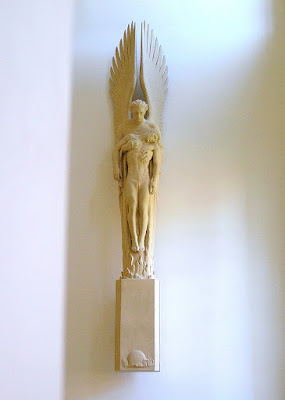 The long, lean young man, weightless in the encircling arms of the angel. The strong angle of the neck with the soft fall of the head. The feet suspended above the earth, just out of the fire. The surrender to a force poised to carry him away. The readiness of the wings, the knowing gaze.

The streamlined 39-foot monument is "unusual in its intense verticality," I read--as was Noah at 6'4". Larger than life--as was Noah in his prime.

There is a Jewish tradition that every blade of grass has a companion angel urging it to grow. I used to scoff at such things. If only there had been a wise, calm companion that Noah had trusted to bear him through the fire to a healing place.

Today, September 10, World Suicide Prevention Day, I pray that those at risk for suicide can stop scoffing long enough to recognize the angels in their midst--and that more people can reach out to those in crisis with compassion and informed support. 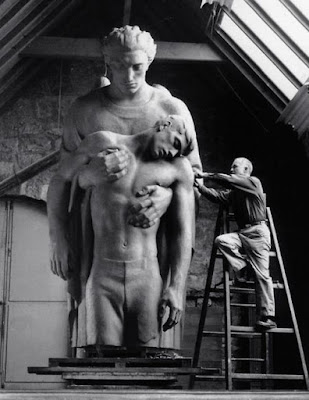