A Bittersweet Taste of Italy


I recently had the good fortune to travel to Italy with my husband, Bryan. He ended the long-distance travel ban he'd clung to after we lost our son, Noah, to suicide in 2013. Before, Bryan needed the routines and comforts of home —and the reminders of Noah there--to keep him centered, while I craved travel as a grief holiday . Now, Bryan was more willing to venture into the unfamiliar and put up with the discomforts of travel. As it turned out, this trip was full of reminders of Noah and the need for the healing routines of home for both of us.

This was no pilgrimage like my last trip to Europe, alone, one year after the suicide. I didn’t need to carry traveler’s blessings and protective poems anymore. This was a pleasure trip that I was intent on enjoying, starting with the beautiful roll of Italian on my tongue. And enjoy it I mostly did, though still in the somewhat blunted way of everything joyful in the past few years. 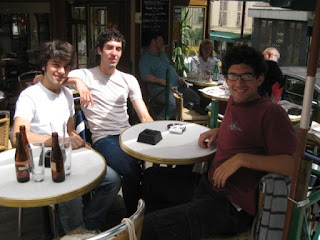 Flying over the quilt of gold and green fields in Europe, I thought of Noah’s passion for the place and how he imagined himself a polyglot citizen of the EU. As an exchange student in France, he met international students and wanted to visit all of them. He wished he could move freely among the EU countries and attend great universities gratis, as they did. He visited his good friend Filippo in his home town in the Italian Alps and was supposed to meet up with him and other friends in Berlin a few weeks before he died. (Here is Noah, center, in Paris in 2009, with Filippo on the right and another exchange student on the left.) I’m sure that had he lived, Noah would have flown often over the route we were taking. He would have made many sojourns in Europe to master its languages, savor its views and cafes. He would have visited Florence again, this time with cash in hand so he wouldn't have to sleep in the train station.

On the streets of Italy, we saw tall, dark, bearded Noah look-alikes with curly hair and Roman noses. I realized, in a tiny osteria in Siena and in a long line outside the cathedral in Florence, that I found excuses to talk with these young men so I could get a better look at their faces and linger in the fantasy. Please, could you translate what’s on that blackboard? Where exactly is that concert tonight? Flashes of familiarity—Noah yet not Noah--in places where he might have, should have been. 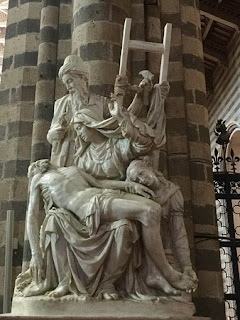 In churches and museums, I gravitated to sculptures of the Pietà that I never cared much about before. Mary’s lamentation, frozen in gesture over the centuries, cried out to me; I knew her anguish cradling a dead adult son in her lap. I was struck by how sorrow and shock transfixed the figures around her in Ippolito Scalza’s Pietà in Orvieto. I got teary as I approached each Pietà and backed away. Yet I wish I could have seen more of these monuments to a mother’s grief.

Despite having Noah so much in mind, Bryan and I somehow forgot to pick up a stone or other little memento of our trip to bring home to put on Noah’s grave. I guess we were too busy taking in all the delights.


I wonder if Europe will always feel infused with Noah’s passions while tainted with sadness. Agrodolce: bittersweet--a powerful draw.
Posted by Susan at 3:50 PM