On Mother’s Day morning, I was alone on a wisp of beach in Santa Barbara. The day felt fresh with limpid light and newly swept sand. I wasn’t expecting any pampering or tributes with Noah dead, Ben out of the country, and my husband busy. So I put my heart in neutral and tried to breathe in gratitude. I was grateful to be in that spot at that moment, bathed by the breeze. I scrolled through photos of Ben and Noah on my phone and my Healing album of people and things that have sustained me over these three years. When I looked up through tears, I saw not one but two whales blowing, then breaching, close to shore. The playful show of spray, flanks, and flukes went on for an incredible five or ten minutes, transfixing me and a passel of surfers. These two creatures showed up right on time for Mother’s Day brunch, along with a missed call from Ben that I noticed later.
The next week, I was at the lake in my home town in suburban Maryland where I scattered the ashes of my mother and father in two separate places many years ago. The man-made lake used to swarm with fish, birds, and waterfowl but now seemed eerily empty. I walked around it starting at my father’s end, thinking about how I need to make room for his memory in my heart and how it’s losing Noah that has taught me this. As I paused at my mother’s end of the lake, a mallard paddled by with a flotilla of impossibly tiny ducklings in her wake, there and gone so fast I hardly believed it. Later, as I rounded the curve at my father’s end of the lake again, a figure stood in profile on top of the dam, regal and still and tall as a child. It was a blue heron gazing into the stream below. I crept as close as I could for a photo. My father, a bird lover, would have been pleased at the heron’s appearance, glad that I stopped long enough to notice what I least expected. If only I’d stopped to notice my father as a person in the few years we had together as adults before his suicide.

“The mourner’s mind is superstitious, looking for signs and wonders,”  writes Meghan O’Rourke in The Long Goodbye. We’re forever seeking meaning in things both ordinary and rare. Is it because we’re in a state of heightened receptivity and emotion? Because our minds are so attuned to yearning that everything becomes proof of the lost person’s presence? As suicide survivors, blindsided by a seemingly random act that upends our faith in the universe, we’re desperate to recapture a sense of order and a thread of connection. Signs affirm that connection by making it visible. They remind us of the enduring beauty and beneficence of the world and its random acts of kindness.

All this serendipity is a balm for the open, broken heart. 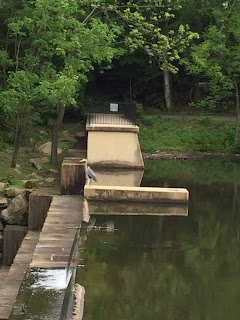