My husband Bryan and I went to Burning Man this summer to see an art installation by our son, Benjamin Langholz . Along with desert survival gear, costumes, angel lights, and gifts for the community that Ben told us we had to bring, he encouraged us to bring photos or mementos of Noah for the Temple. 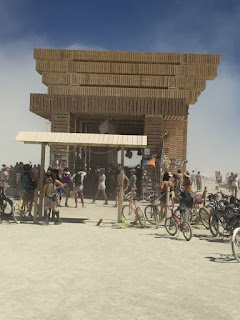 The Temple is the largest structure at Burning Man, a quiet sanctuary for people to rest and grieve or simply sit with their losses, regrets, and sadness. Ben told me he was grateful to have a place to bring such feelings in the early years after his brother’s suicide. The burning of the Temple at the end of the week-long encampment, for Ben and many others, is a cathartic release of the pain of loss. “Leave behind what no longer serves you,” read signs as you drive into Burning Man and as you walk into the Temple.


As readers of this blog know, I’m a holder-on, not a letter-go, especially when it comes to Noah’s memory. I’m so concerned that I’ll forget facets of who he was and how he lived that it’s hard for me to even consider what I want to forget. While preparing for Burning Man, I forced myself to make a short list of forgetables, all related to Noah’s mental health struggles and the scene of his death.

Among the things I want to forget:


-       - watching Noah suffer over two years as his demons stole away his heart, soul, and life force—his terror at near-death anxiety attacks, his agitation during a psychotic break, his months of affectless numbness 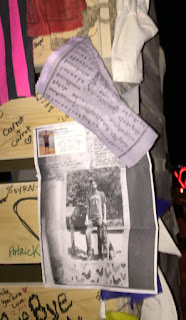 It pains me so much to remember Noah’s suffering; of course, I’d rather picture him in the prime of his life. Yet if I allow memories of his struggles to recede, will I ever reach a truer understanding of his despair? Already after six and a half years, the “facts” of Noah’s decline reveal themselves differently; if I loosen my grip, what future insights might I miss? I decided that I wasn’t ready to release those memories at Burning Man, but I could bring a photo of Noah from the last year of his life that didn’t look like him, so transformed was he by his illness. I was glad to surrender that image to the ashes, along with the first few items on my list. 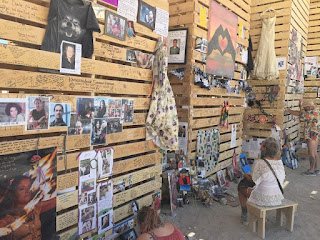 Inside the Temple, I was struck by the hush of hundreds of people silently filing through an enormous collective shrine. The walls inside and out were plastered with large pictures of the dead, their clothing, shoes, jewelry, and prized objects, along with their stories. There were way too many photos of young people and I couldn’t help thinking: suicide and overdose. I was touched by how many Temple visitors stopped to read the stories and immerse themselves in others’ grief or to hold someone who was crying. With all the cool-headed “leave it behind” messaging, I hadn’t expected to feel such a communal outpouring of sorrow. I regretted that I hadn’t thought to bring bigger pictures and reminders of Noah’s life to add to the mix.

Driving home from Burning Man, Bryan and I indulged in our usual would-have/should-haves while traveling: how Noah would have jumped at the chance to help build Ben’s installation, how he would have thrown himself nonstop into Burning Man revels and delighted in meeting fellow free spirits from around the world. Of course, we have no way of knowing if, had Noah lived, Ben would have become such an avid Burner or reinvented himself as an artist. As Ben said as we were leaving the Temple, grief can be a mighty spur to creativity. If so, then Ben’s installations are, in part, his brother’s legacy.

In the wake of Burning Man, at the end of Suicide Prevention Month, in the middle of these days of awe and remembrance in the Jewish calendar, I like to think that had Noah lived, he would have channeled his intense feelings after a friend’s suicide into his own artistic vision and recaptured his life force. 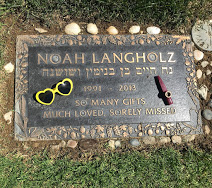 To My Fellow Survivors: What are you ready at this point to set aside about your loved one’s suffering and suicide? What is on your list of forgetables?