My spiritual study group was meeting in my living room last month when I happened to look up and catch a glimpse of my son, Noah, listening intently with a bemused expression. We were discussing the “hidden light” of Creation that Jewish mystics say is revealed in the Hanukkah candles. I could tell Noah was both intrigued and skeptical at the same time, as he would have been had he been present.
And he was present in a way I’d never felt before. The angle of light, seen from the side, enlivened his painted face on the wall and caught his eye, as if he were just about to speak. I had to close my eyes with sudden tears before I stole another look. He’d been listening in the whole time. Of course--he was starved for all the learning and conversation he would have had, had he lived. I always sensed he was an old soul who, in spite of youthful resistance, would turn to spiritual searching or the study of religions as he got older. I should bring home more stimulating discussions for him to audit, I thought. I was so pleased to have seen a flicker of his spirit. 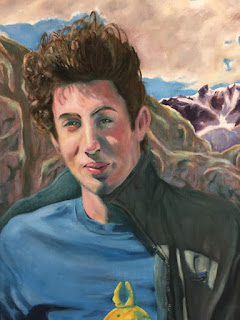 The big portrait of Noah, made by my niece, shows him on a family trip at 14, seven years before his suicide. The larger-than-life image looks most like him from a distance, like when I approach the front door from outside and see his reflection in the window. It’s as if Noah is home again, his tall frame filling the entry hall.


It was at a distance that I locked on the portrait a couple weeks later. I was looking out the window at the trees, chanting gratitude blessings for Shabbat morning. I don’t know why I turned around to see Noah; maybe I was hoping for another epiphany. This time his face was still and remote, frozen in time. I missed him with such a pang. My throat clenched shut and I couldn’t sing thanks for anything anymore. I could only croak a lament and run for tissues.
I ended up rocking on the bed holding Noah’s old stuffed animal, Deerie, as I do in my worst crying fits. When I wandered into the kitchen, drained, with Deerie, our other son’s French bulldog, Miso, rose up on her tiny hind legs and began barking in alarm. I slid the furry deer puppet onto my hand and made it bonk Miso on the head, just as Noah would have done. 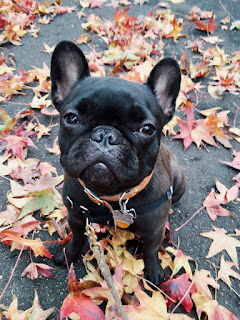 He would have found that pugnacious little dog totally ridiculous and lovable. The little dog that Noah never met, that helped ease our son Ben’s shock and sadness after the suicide. That Ben eventually turned over to my husband and me, knowing that we, too, needed something small to cuddle and adore in our bereavement.


*
A therapist friend recently asked me to help her with a project on long-term grief and I agreed--but really, what do I know about it? Grief feels buried deep within, rarely surfacing in tears, memories, or dreams. Sometimes I wonder if my intense focus on mourning in the first few years after losing Noah made for a kind of accelerated processing so that there’s little griefwork left to do, at least for now. I wonder what I might be missing or repressing as grief takes up less space in my life.


Noah’s presence in the living room that morning was a gift. I miss him terribly. There's no formula or to-do list as we move through the years after a suicide. I guess this is what long-term grief looks like.
*
To my fellow survivors: When do you sense your loved one’s presence? Where can you go or what can you do to feel more in touch with their spirit? Let them in, let your love go out to them, especially in this holiday season when we can feel so isolated and bereft. Wishing you peace and connection, with the dead and the living.