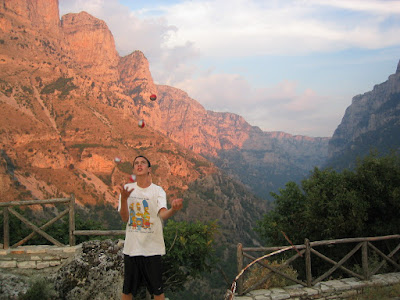 Today is Noah’s birthday, what should have been his 27th.

Last Sunday was Juggle Fest! 2018, a festival in memory of Noah organized by my husband, Bryan, and the South Pasadena Juggling Club. Noah was a fanatic (and fantastic) juggler from about age 9 to 14 and a founding member of the club. He learned how to juggle from Bryan and forced himself to master the skill by juggling three balls 100 times until he could do it without dropping. He learned tricks effortlessly, especially complicated passing patterns. He reveled in camaraderie with people of all ages at festivals and workshops.

Juggling gave Noah a fun activity to do anytime, anywhere (Parthenon, anyone?) with his brother and dad. It gave him an identity and a way to be involved in his community when he juggled at shows, parades, and a hospital children’s ward. It even gave him a topic—persistence--for his college application essay.

It was riveting to watch the joy and fluidity of his juggling. And bittersweet at Sunday’s festival as we shared memories of Noah’s juggling days with the crowd in a speech and slide show. You can see some slides and short video clips of Noah juggling here .


This morning Bryan and I walked to Noah’s favorite doughnut store. I was mulling over other things I might do to remember him, like look at photos he took on his travels or attend the Women’s March, when an old friend called with terrible news. Her daughter, 29, took her life yesterday amidst an onslaught of health problems. How is it that this horror keeps happening, cutting down young lives and laying low a whole circle of people around them? I hope I can be a companion in grief for my friend as she so sensitively has been for me these five years.

For everyone who is hurting from suicide loss right now: I'm thinking of us as I admire two newly opened sunflowers, turning toward the sun. Let's help each other keep turning toward hope and light.