He didn’t make it, say the war buddies, the fellow sufferers, the family members. Didn’t make it through the barrage of bullets, the months of malnutrition, the Stage 4 cancer, the plane crash, the wildfire. Didn’t make it out of the ICU after heart failure, poisoning, or suicide attempt. Didn’t make it, though others did.

By all rights, he should have been a survivor. Noah knew he was lucky, blessed with health, strength, wit, talent, love, opportunities. He should have been the one leading parched travelers out of the desert, finding the oasis. Maybe that’s what made it so hard for him: With everything to live for and so much he’d been given, why did he feel so lost and worthless?

Noah’s peers are in their late twenties now, trying to figure out how to make it in their various pursuits--or at least how to find their vocation. Noah didn’t make it to this cusp. He let go before getting anywhere close. 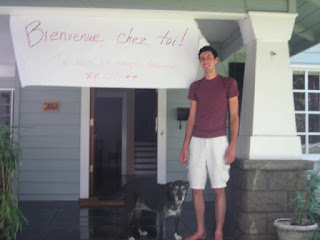 He made it to the top of Mt. St. Helens.
He made it onto the high school water polo team, though he’d never been on swim team.
He made it through a year of study abroad at a French lycée with Latin 3, though he’d never had Latin before. And in France, he made it inside another language, family, and identity that he prized (the photo is from his return to the U.S.).
He made it into the only college he really wanted, Wesleyan University.
He made it so that people were drawn to him, swept up in his conversation and wild schemes.

He made it hard to get close with the mask of charisma he nearly always wore.

He made it through one good friend’s suicide and another’s attempt.
He made it out of bed while dragged down by depression.
He made it to a year of therapy.
He made it hard to help him when his symptoms worsened.

He made it to the finish line at the L.A. Marathon, two days before he set his own finish line for life.

He made it hard to understand that someone like him couldn’t or wouldn’t make it.

With how he lived and how he died, he made it into so many hearts.

It’s the turning of another year. In a couple months, we’ll mark five years without our beloved Noah in this world. The fact that he’s gone is more undeniable every day yet still unbelievable, unacceptable.

I’m touched by Noah’s brief appearance as “little bro” in a new rap song by his older cousin, Gabe Braun , and by Gabe's lines on the aftermath of suicide that capture the plight of those left behind:
a heavy stone in my chest
weigh me down or help me grow

To my fellow survivors: In what ways did your loved one make it in life, despite not making it to the lifetime you would have wanted for them? What can you do to make the weight bearable and eventually, make way for new possibilities?
Posted by Susan at 9:26 AM