Since Noah’s suicide, people have been asking how his older brother, Ben, is doing. It’s been hard to know with Ben living in another city and not inclined to talk much about his feelings. Of course, he was in shock and distress at the funeral, letting loose a terrible cry when the coffin was opened. He had brief outbursts of sadness at the one-year memorial, cemetery visits, and no doubt other moments that we as parents didn’t see. Though he rarely talked about Noah or grief, he called and visited us often in the early months and listened to us talk and cry; that was his way of trying to help, accompanying our grief journey. He didn’t want to attend a support group, see a therapist, or talk to friends about his loss.

Ben was almost 24 when he lost his brother. He seemed determined to not let tragedy cloud his cheerful disposition or derail the life he was building with a new job, a girlfriend, and an apartment in San Francisco. “I was on a roll and I didn’t want anything to stop me,” he later told me. He went ahead with a birthday party that his girlfriend had planned about a week after the funeral and said it was comforting to have his friends around him.

While I didn’t want Ben to be overwhelmed with grief and unable to function, I didn’t want him to act as if nothing had happened. I wanted him to be part of our family’s grief journey. I’ve had to learn to accept that his way of grieving is different than mine and a common response for young people after suicide loss, especially young men. I’m just afraid one day grief will hit him full force and we won’t be there to help him.

For much of the first year, it was devastating to walk along the street or go out to dinner as a truncated family of three rather than four. The new equation felt wrong, impossible; Noah’s absence loomed large, a raw amputation of our idea of family. Imperceptibly over time, we’ve gotten used to the new configuration. I don’t want Ben to ever think he has to replace Noah or make up for his loss.

It grieves me that Ben has trouble remembering the good times growing up with his brother. Noah adored Ben as a child, following his lead in making forts and dams and odd constructions, dressing up the dog, and playing video games. He and Noah moved in totally different worlds as teenagers and weren’t close as young adults, though they were starting to spend more time together. Ben later said he wished he’d reached out more to Noah. He and I share regret about things not said and done and the forever lost chance at reconciliation.

Our tall boys had started to look more alike as adults, and this intensified after Noah was gone. Sometimes we’d be startled to glimpse Ben in profile or at a distance. He began to wear his beard like Noah, his pant legs rolled up like Noah. He said Noah inspired him to be more adventurous. He began rock climbing. He quit his job to travel for a year. He brought back a bottle of sake from Japan and poured it over Noah’s grave. He said he wished they could have traveled together—how if Noah had arrived with him after hours at a fort in Spain, Noah would have scaled the wall to check it out; how Noah should have stuck around to see some cool places. Maybe the new roads that travel opens up will give Ben space to grieve and remember.

I’m glad Ben thinks about Noah as he explores the world. I’m just so sorry he can’t explore along with his brother, much less do the ordinary things adult brothers do like go out for a beer, throw a Frisbee, or make fun of their parents. I’m so sorry he’s lost that precious family tie and will spend the rest of his life an only child. As he seeks his path in life, I hope Ben finds some sense of brotherhood with others and an enduring bond with Noah’s spirit. Noah would  surely cheer him on. 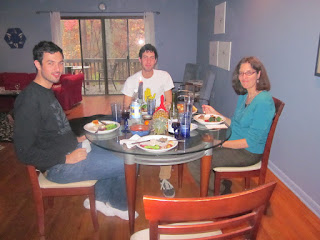 (At a family Thanksgiving away from home in North Carolina in 2010, when Ben -- at left-- and Noah--center-- started to enjoy each other's company again.)
Posted by Susan at 10:32 PM