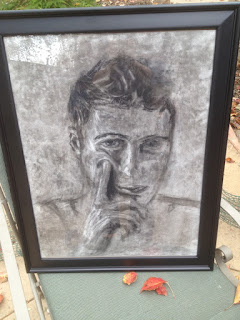 What now? From the early months of this loss, I’ve always had a mental list of things to do for Noah. I needed to feel active and continue to do things for him and his memory, just as I do things for my living son. There were people to contact, supports to seek out, books to read, epitaphs to choose, memorials to arrange, blog entries to edit, donations to make. I would tell friends about things I’d done for Noah in the same way they caught me up on the latest news from their kids. These actions were a way to keep Noah’s name and my grief part of daily conversation. It was comforting to continue to have him on my mental calendar.

Now as we approach the three-year mark, there’s less and less to do. Of course, there’s still much to learn about the devastation of suicide. My husband and I are still mulling over a way to do good in the world in Noah’s name. I’m still adding to this blog and working on a book based on it. I’m increasingly involved in the suicide loss support and suicide prevention communities. But these are mainly public tasks. The personal items on the list are diminishing as we have less contact with his friends, fewer occasions to remember him.

I just ticked off an overdue item. About eight months ago, Noah’s college sent us a portfolio of drawings that he left behind. The huge box lay unopened for days as we realized this was the last thing we would ever receive from Noah. Most of the pieces were rough sketches; a few, like a large self-portrait, were more developed, pretty good for someone’s first art class. My husband and I agreed to frame the portrait but let it sit for months. What was the rush? When we finished this task, there would be even less on the list.

Today, before framing the drawing, I applied fixative to the charcoal. At the art store, they asked if I wanted the fixative that allows for further alterations to the work; no, that wouldn’t be necessary. This piece, like Noah, was finished forever, its imperfections suspended in time. There would be no more chances for Noah to master technique and refine his vision, or for us to enjoy his accomplishments. All we’ll ever have of his artistic aspirations are novice drawings and photographs.

We have the satisfaction now of living with Noah’s pensive, larger-than-life face in our midst. But we also have the emptiness of contemplating a list that has lost much of its urgency and substance.

The list is the unfinished business of our connection to Noah, drawn out as long as possible. Its tasks are our efforts to say the good bye that his suicide denied us. We’ll never be finished with the list. But it’s changing. What now?
Posted by Susan at 2:20 PM